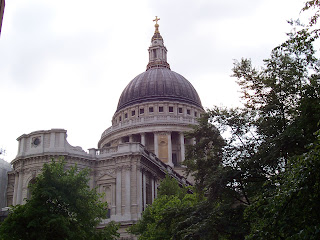 The cathedral of London, dedicated to Paul the apostle, was originally built in circa 886, on Ludgate Hill, which is the highest point in the city of London.

The episcopal see was actually founded as early as 604, but the location of the first cathedral is not known.

The church on Ludgate Hill was destroyed in 962 due to fire. It is assumed that the church was built in wood. The next cathedral was begun in 962, possibly in stone. However, this structure also succumbed to fire, in 1087.

A Norman style cathedral was begun shortly after the fire, and it is this structure, though heavily modified, which was destroyed in the famous fire of 1666. The new church was completed in 1314. In the meantime, work was delayed by another fire in 1135.

The choir, added in the 1250s, was in the gothic style. The nave and transepts however, were Romanesque and initially built with a timber roof.

Once completed, the cathedral attained a full length of 178 metres. The central spire reached the height of 149 metres in the years 1444 to 1561. Always vulnerable to lightening strikes, no further efforts to rebuild the spire took place after that year. 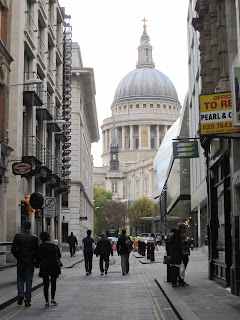 Inigo Jones, the man credited as the first English architect to introduce classical architecture to Britain, produced a proposal for a re-design of the cathedral’s west front in 1620.

The cathedral had been in bad shape since Elizabethan times, but funds were not immediately available. In 1634, however, Jones was appointed surveyor of a commission to repair St. Paul’s.

Jones restored the gothic choir without alterations, but encased the rest of the structure in rusticated masonry. The biggest change was at the west front, where Jones added a 10-column wide portico surmounted with statues. The model for this was probably Palladio’s drawings of the Roman temple of the Sun and Moon, now believed to have been dedicated to Venus and Rome. One of the towers of the west front originally belonged to the adjacent church of St. Gregory by St. Paul’s. A second tower was added for the sake of symmetry.

Jones travelled to Italy and became influenced by the works of Andrea Palladio. He also got the opportunity to study Roman ruins. What is noteworthy in the case of Jones is that he rejected modern architectural trends (mannerism/baroque) in favour of a relatively pure classical style, which approximated ancient Roman buildings. This tendency had a profound impact on 18th century English architecture and also decided the basic theme for Christopher Wren’s cathedral.

Jones’ restoration was interrupted by the civil war, during which some damages was inflicted on the building. A commission was therefore set up to undertake repairs and restoration in 1663. Three individual assessments were solicited, including one from Christopher Wren.

The weakest point of the structure was the central tower. Wren, therefore, proposed to tear it down and replace it with a tall dome over the crossing.  The design of the dome seems to have been inspired by Bramante’s proposal for St. Peter’s, which Wren likely knew through drawings. There are also some signs of French influence. Paris was the only foreign city Wren actually visited.

The rest of the structure was to be encased in masonry, “after the good Roman manner”, on the same lines as Jones’ project. Wren’s proposal was agreed in principle in August 1666. Only six days later, the great fire of London began. 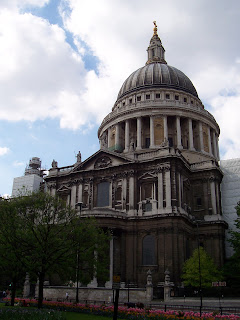 By 1668, the issue of what to do with the cathedral had become more pressing than ever. However, the hope in that year was still to retain the nave. Wren was initially only instructed to demolish the choir and central tower. Only after parts of the nave collapsed in April were the authorities persuaded to build an entirely new church.

Wren produced several drawings in the period leading up to the Great Model in 1673. He seems to have experimented with two basic outlines: One scheme, which Wren gradually rejected, kept the outline of the old church and was fairly similar to the 1666 proposal, with a domed space above the crossing and the rest of the church in Roman masonry. Wren also seems to have wanted to keep the portico, which had been added to the west front by Inigo Jones.

The second scheme introduced the Greek cross plan, and is what Wren eventually came to favour. Designs usually feature a pedimented portico on the west front and a large dome over the central space. The precedent for this outline comes from Bramante’s and/or Michelangelo’s plans for St. Peter’s Basilica. Interestingly, Wren who was familiar with French architecture looked to primarily to Roman models. Most likely, this was due to the influence of Jones and architectural treatises. 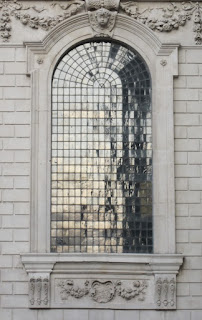 Wren produced several drawings but the Great Model shows the project at its most mature stage.   The exterior and interior has a Corinthian order, as does the portico, and the large dome resembles Sangallo’s design for St. Peter’s. Unlike previous drawings, there is a domed vestibule in the west, which gives the model the outward appearance of being directional. The pediments at the transepts are broken by arches, adding a touch of mannerism. The model was made by the joiner William Cleere.

However, the Greek plan was rejected by church authorities. In the warrant design that Wren produced and got approved in 1675, he, therefore, reverted to a directional Latin Cross plan. The warrant design appears to be an attempt to reconcile classical elements with the outline of what an English public might expect of a cathedral: more height for the body of the building and an imposing tower and spire. The result looked very strange, and Wren began to revise his plans as soon construction began. However, the concept of combining classical features with patterns borrowed from gothic churches remained.

The first change was to reintroduce the dome. However, this caused some difficulties, because it had too be tall enough to meet the expectations for a London landmark, yet not so large as to overwhelm the relatively small body of the building itself. It can be seen from the Great Model how this might look awkward.

The solution was to raise the second storey introduced in the warrant design and build a screen wall around the entirety of the structure. This also had the added advantage of hiding away flying buttresses. This is why the external walls of St. Paul’s do not recede inwards at the level of the clerestory. The west front portico was elevated to two levels and towers were introduced to hide the sham wall. Difficulties with lighting the interior through two external walls seem to have been effectively overcome.

It was also around 1675 that Wren redesigned the transept elevations, with huge circular porticos. To this would later be added broken pediments and pilasters decorated with strips of garlands, showing signs of both French and Italian baroque architecture. 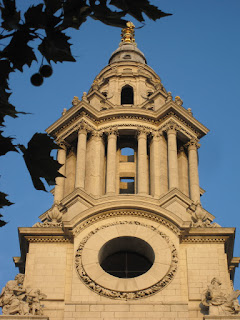 The penultimate design of 1675 conforms approximately to the finished result. However, two elements were still in development, the western towers and the dome.

In 1683, Wren seems to have experimented with French designs, resembling closely the domes of Mansart and Lemercier. However, by the time construction of the dome began in 1700, he had switched to what is essentially Bramante’s Tempietto on a massive scale.  Wren filled in every fourth inter-columnation with an empty niche to retain harmony. The difference this produces can be seen by comparing with the Pantheon in Paris where no such expedient is used.

The dome has three shells, one semi-circular seen from the interior (in brickwork), one cone-shaped to support the weight of the lantern (also in brickwork), and one outer wood and lead structure to give the external silhouette.

For the towers, Wren moved in the opposite direction, away from the classical simplicity of Bramante towards a baroque complexity similar in style to Borromini. 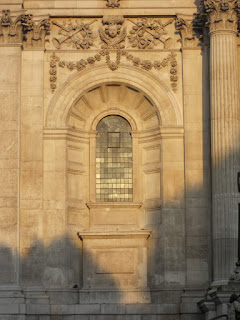 The cathedral was structurally complete in 1709. Some of the later work was done without the authorisation of Wren. He was dismissed from his post in 1718 in a Churchill-like vote of no confidence.
Publicado por Joachim Moxon en 13:06